Is energy efficiency a silver bullet for climate change mitigation?

Energy efficiency has been appraised as one of the most important and cost-effective ways to mitigate greenhouse gas (GHG) emissions across various energy-consuming sectors including buildings, transport and industry. In the report ‘Energy efficiency: a recipe for success’, the World Energy Council (WEC, 2010) suggests that:

“Energy efficiency is the winning strategy to simultaneously address a variety of policy objectives, including security of supply, climate change, competitiveness, balance of trade, reduced investment need and environmental protection.”

As such, energy efficiency measures have been widely incorporated into the national policies of many carbon-intensive economies, particularly in developed and middle-income countries. Major OECD countries including Western Europe, the United States and Japan adopted a wide range of policies and programmes to increase energy efficiency in the wake of the oil crises of the 1970s (Geller et al., 2006). In general, there is an indiscriminate tendency to see energy efficiency as the main way to reduce energy demand, despite the current prevalent trends of increasing energy consumption worldwide. Therefore, this article will review both positive and negative sides of energy efficiency, and evaluate its effectiveness in climate change mitigation. The aim of this article is not to depreciate the merits of energy efficiency, but rather to provide a balanced and objective overview of the concept and assess whether it achieves what it aims for, which is climate change mitigation.

Energy efficiency is the ratio of desired (useable) energy output to the total energy input. In the case of natural gas for home heating, for example, energy efficiency is the ratio of heat energy supplied to the home compared to the calorific value of the natural gas entering the furnace (Grubler et al., 2012). Energy inputs are typically measured in energy units, such as joules (J), while outputs are measured in one of the three ways: energy units, other physical units (for example, number of products produced) and economic units (GDP) (Allen, 2012). Energy use per unit of GDP is referred to as energy intensity, and reduced energy intensity is mainly attributed to improved energy efficiency among other factors.

Energy efficiency is a crucial issue when we examine the energy conversion process. Figure 1 (Grubler et al., 2012:117) illustrates the supply chain energy flows for illumination services (lighting). It shows that only about 1% of the primary energy expended is transformed into the end-use services, and the majority of the energy losses occur at the thermal power plant.

The conventional argument for energy efficiency is that using less primary energy to produce a given level of services reduces the costs of energy services and energy intensity, thereby decreasing CO2 emissions. The International Energy Agency (IEA) estimates that investment in energy efficiency since 2005 has reduced energy consumption by 570 million tonnes of oil-equivalent (Mtoe) over a 5 year period (2005-2010) in 11 IEA member countries, including the United Kingdom, the United States and Japan (IEA, 2013). Figure 2 (IEA, 2013) shows that energy efficiency investments made since 1974 have had accumulative impacts on energy consumption, avoiding 63 exajoules (EJ) (1.52 billion tonnes of oil-equivalent) in these 11 member countries in 2010.

These energy savings are net of any ‘rebound effect’, a term which will be discussed in the next section. It is important to note, however, that this positive record does not include any rapidly growing economies, including BRICS which are the major CO2 emitters today.

The Fourth Assessment Report (AR4) of the Intergovernmental Panel on Climate Change (IPCC) has also demonstrated that improved energy efficiency has played a key role in reducing energy intensity and society’s CO2 emissions over the last three decades (IPCC, 2007). Figure 3 (IPCC, 2007:30) shows that reduced energy intensity will continue to play a vital role in the next three decades in terms of global energy-related COs emissions.

Despite some positive results in energy consumption reduction in a number of developed countries, the question still remains as to whether energy efficiency has reduced the overall greenhouse gas emissions demand, because ultimately, it is the reduction of demand that we want to achieve for climate change mitigation.

In this respect, the role of energy efficiency in demand reduction has been questioned by many scholars and practitioners. The starting point of these critiques is the ‘rebound effect’, the concept developed by Stanley Jevons in 1865. As one of the most well-known criticisms of energy efficiency, the rebound effect occurs when improvements in energy efficiency (i.e. reduced energy input) make energy services cheaper, leading to an overall increase in energy consumption (Keay, 2011) . For example, if a factory uses its energy efficiently, it will become more profitable and therefore increase input to produce greater level of output (Sorrell, 2007). This is termed the direct rebound effect. Indirect rebound effect is another issue, whereby the reduction in the cost of energy services allows consumers to spend their saved money on other goods and services, counterbalancing and negating the energy saved from efficiency measures (Sorrell, 2007).

Historical evidence supports the rebound effect, showing that increases in energy efficiency led to increases in demand for energy. Fouquet and Pearson (2005) estimate that since 1750, each person uses on average:

Herring (2006) also demonstrated that the efficiency of lamps used for street lighting has increased energy consumption in the UK since the early 1920s (figure 4). 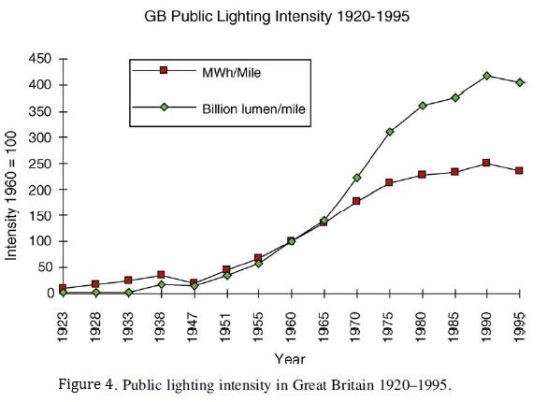 Decreased energy intensity does not always correlate positively with total energy consumption reduction. Since the 1970s, the UK’s overall energy intensity has decreased because GDP has increased while energy used has remained steady (Allen, 2012). Its total energy use, however, has not declined and its business-as-usual scenario shows that the total consumption will continue to rise (figure 5).

The world’s largest CO2 emitter, China, has a similar trend to the UK. Since the adoption of an energy efficiency policy in the 1980s, its energy intensity decreased dramatically, while its energy consumption increased (Figure 6). 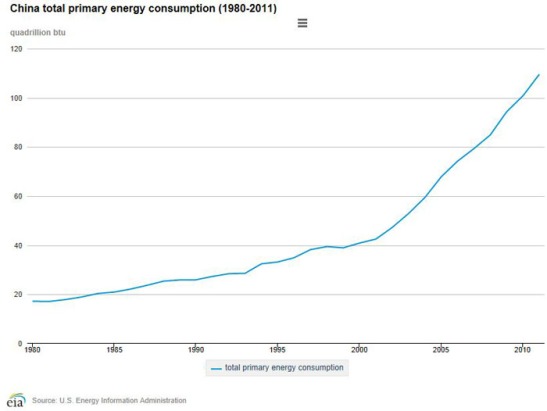 Of course, there are many reasons attributable to the increases in overall energy use in these countries, but the main point here is that energy efficiency alone cannot stabilise ever increasing GHG emissions. If efficiency simply leads to higher consumption of energy services with no net reduction in end-use services, its goal of mitigating climate change cannot be achieved (Keay, 2011)

Energy efficiency is an important means to reduce primary energy input and energy intensity. It cannot, however, be a silver bullet for greenhouse gas emissions reduction. Any kind of efficiency measures need to take the rebound effect into account (For more information about measuring rebound effect, see Sorrell, 2007). Also, combining energy efficiency with carbon taxation and clean energy initiatives – such as renewable energy sources – could be a more feasible way to reduce carbon intensity and overall energy use (Herring, 2006).

Lee, G.E. 2014.  Is energy efficiency a silver bullet for climate change mitigation? [Online]. Available at: https://climate-exchange.org/2014/03/11/is-energy-efficiency-a-silver-bullet-for-climate-change-mitigation/  [accessed + date when the website was accessed].

Eun Hye is an intern with Division of Mitigation and Adaptation. She previously interned with UNEP Headquarters in Nairobi where she supported the preparation of COP-12 to the Convention on Biological Diversity and UNEP publication ‘State of Biodiversity in Africa’. She also undertook internship with UNEP New York Office, where she covered intergovernmental and interagency meetings held at UN Headquarters to follow up on the outcome of the UN Conference on Sustainable Development (Rio+20). Eun Hye holds a Bachelor of International and Global Studies from the University of Sydney, Australia, and a Master’s degree in Climate Change and International Development from University of East Anglia, UK. A citizen of Korea, she speaks Korean, English and Spanish.
View all posts by Grace →

2 comments on “Is energy efficiency a silver bullet for climate change mitigation?”